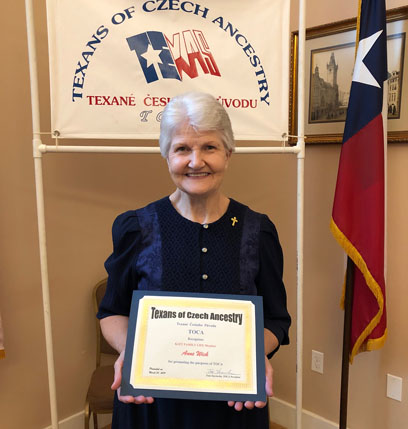 KJZT Family Life is honored and pleased to introduce our 2019 Texans Of Czech Ancestry (TOCA) honoree, Anne Wick. Anne personifies the Czech Heritage with her love for song, dance, and her pride in the Czech language. She demonstrates her passion for our heritage with her dedication to our Fraternal, and the time she gives teaching our junior members not only about our Heritage, but about the importance of our faith and family.

Anne was born in Shiner, Texas to Paul and Ludmila Pokluda who were pure Czech descendants.
She grew up on the family farm in Flatonia, Texas, and she is the youngest daughter of 7 children. The Assumption of the Blessed Mary Catholic Church and School in Praha were instrumental to her love for her faith and singing. Anne began her journey with KJZT Family Life as a child, being a part of the Praha Society thru her grandmother, who was a Charter member. In her youth, Anne sang in the Czech Church Choir and was a member of the Moravia Czech Heritage Singers. She also participated in the Czech Christmas Concerts.

She instilled in her children, nieces, nephews and other family members the value of their Czech Heritage by organizing a group called the Little Czech Singers with her father, Paul, playing the accordion. This young group performed at the Czech Heritage Festival in Victoria, Texas, the Fraternal Congress Convention Youth Spectator and at numerous Nursing Homes. The Little Czech Singers were asked to perform in Fayette County, at the Fayette County 100-year Birthday, where the group was featured on the Channel 2 news. During the feature, Anne was asked about her work with the children and her Czech Heritage, a memory Anne holds dear to her heart.

Anne’s love for her Czech Heritage and Catholic faith led her to her job at KJZT Family Life. In 1973, Anne became a secretary for the State President, Benita Palvu, where she took on the responsibility of being the Assistant to the Editor of the KJZT Journal. In 1987, Anne became a State Director, and in 1993, she was appointed State Co-Coordinator of Junior Activities; a position she still holds today, mentoring our junior members throughout Texas. Anne incorporates our Czech Heritage in our junior program through State activities, State Events and our Camp Guardian Angel.

Anne has been married to her husband, Elroy Wick, for over 37 years. She is the proud mother to Christopher Wick, and Catherine Wick Sylvester. She has a daughter-in-law, Sara, and a son-in-law, Trey, along with three grandchildren, Matthew, Lily and Hadley, who are all members of KJZT Family Life, and she has a granddaughter on the way, who we are sure will become a member.

Anne, we, thank you for your dedication to KJZT Family Life and for preserving our Czech Heritage.

There are no upcoming events at this time.